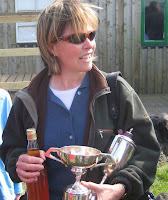 Mrs A seemed very pleased to make off with her loot after her horse Foodbroker Founder won the Ladies Open under daughter Lucy at the Fife point-to-point on Saturday. It has taken us a little bit of time to work out this quirky little horse and he came from well off the pace to win cleverly; having lain for dead at the last fence in the same race last year it was a huge relief that he finally came good and particularly pleasing that he did so at our local track. This horse that was engaged in the 2003 Derby has a little bit of history, trained by David Elsworth he won on the flat, was beaten a short head at Royal Ascot, became Desert Orchid's travelling companion and soul-mate, won a couple over hurdles and the last jockey to sit on him prior to Lucy was AP McCoy.... hopefully he can progress from here on the pointing circuit but we also fancy giving him a couple of spins on the flat through the summer.

Earlier in the afternoon Almost Blue was a comfortable winner in the Members Race, brother Jamie recording his 7th (a record surely?) win in the race in a match against his niece Lucy riding for the Normile stable.


It was a good afternoon's racing in glorious sunshine and much needed having withdrawn our horses at Perth due to the ground being a little bit quick. We did manage to give a couple of promising youngsters a racecourse gallop on Friday evening but the ground frustrations continue this week with Amulree and Fearless Footsteps having to bypass their intended engagements at Kelso this evening. I am sure it will rain sometime but probably not until I have finally thrown in the towel and turned the horses out for a summer break.

Last Saturday represented the formal end of the 2008/9 National Hunt Season. Reflecting on our stats I see that we had 4 winners & 6 seconds from 51 runners. All the winners came in the pointing field and thank goodness for that as we had very little luck on the track with several horses going wrong and some of them not being quite right in the middle of the winter. Whilst it is undeniably easier to win in point-to-points with an ordinary sort of horse, it is still very competitive and you have to be fit, healthy and lucky. The problem on the track is that until you get into handicaps you are generally competing against some very expensive horses and, with us, our handicappers either went wrong or just weren't up for it.

The great thing about racing is one is always looking forward and we have some very nice young horses to look forward to next season and a few old favourites coming back from injury so we will hopefully make a bit more of an impact on the track this time round.

I say "next" season but it has of course already started and we intend to be in action on Sunday at the Lauderdale point-to-point, as mentioned we have bypassed Kelso today but we have other options at Hexham on Saturday evening and Witton Castle (wherever that is) on Bank Holiday Monday - it would be highly satisfactory if we could start off where we finished, with winners!

...it will be 3 weeks since we had a runner when we finally swing back into action this weekend, frustrating when we have 7 horses primed and ready to go but it has been astonishingly dry and as a result the ground has been very firm. All being well the watering will have done its job though this weekend at Corbridge; Almost Blue and Foodbroker Founder will hopefully line up on Sunday afternoon, both are in great form and put up career best efforts last time out so fingers crossed, thereafter we have 3 nice horses to run at the Perth Festival next week where I am sure there will be nice ground.
With an absence of racing opportunities I took the opportunity to nip over to my beloved Murren for a couple of days skiing in the week running up to Easter; the advantages of being fairly stout came into play when I collided with an unfortunate Mancunian at full speed on part of the famous "Inferno" run, whilst we both had the wipeout of a lifetime and I am still nursing a sore shoulder he was rather more immediately inconvenienced by regurgitating on impact the spinach soup he had just had for lunch which upset him somewhat, fortunately my "bratwurst mit katoffelsalat" was rather more solid and remained in situ. 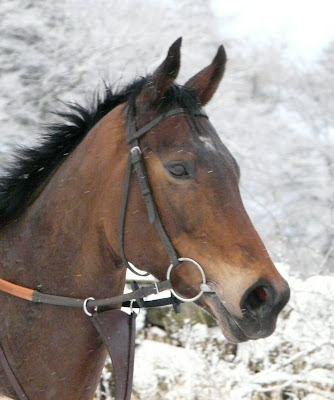 We were in need of a diversion with Northern Dusk having to be euthanased during Aintree week. Apart from the pain of losing a lovely horse that had become a real friend it is a major strategic blow to a small yard like ours.
In the summer of 07 a very good friend had indicated that she would like a share in a good long term National Hunt prospect and with a decent budget in hand we headed off to Doncaster Sales, we drew a blank and then headed to the Newmarket Horses in Training Sales where we again drew a blank. By this time we had the irrascible Irish bloodstock agent, Gerry Griffin, in tow and he set about finding us something privately in Ireland. I was laid up with my broken hip when he called having found this good prospect down in Co Wexford, unable to travel we had to take his word for it and in early December he arrived at Kinneston. He wasn't the most impressive horse when I first saw him and having only just been backed he had a few behavioural issues as well and he was clearly going to need a bit of time. 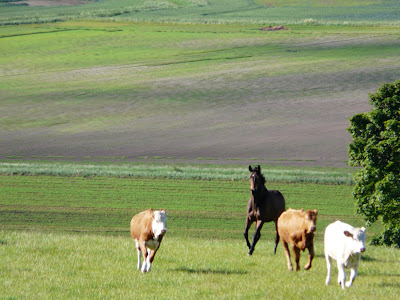 We gave him just that and over the next fifteen months he gradually learnt his job, stopped galloping like a kangaroo and overcame his phobia of being near other horses. What was really exciting about him though was his acceleration, the first time we asked him to quicken I was left with my mouth hanging open and after that every time we gave him a little squeeze to see what would happen the power that he showed would literally make the hairs on the back of my neck stand up; he kept me awake at night. As well as that he grew into himself, developing a self-belief that translated itself into his whole demeanour - he knew he was good. 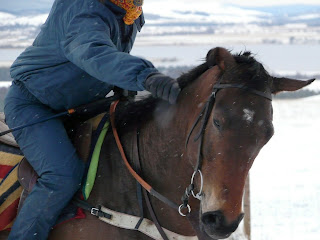 After one or two false starts we eventually arrived at the racecourse on Friday 20th March this year and trainer was definitely nervous, I didn't expect him to win as I knew there was plenty still to work on, he would be green and there would be limitless improvement to come. He ran a brilliant race but faded slightly in the closing stages and as soon as he eased up I could see there was a problem. The rest, as they say, is history, but he was well looked after in Hospital and seemed content when I visited him. Having initially diagnosed a fractured pastern further investigation revealed multiple fractures in his knee, at the end of the day his legs weren't strong enough for his heart and I am afraid to say that to succeed as a good racehorse they need to be. It is disappointing for me and a big blow for the owners but most of all I feel for all those in the yard here that looked after him so well and turned him from the slightly plain nervous animal that came off the lorry from Ireland into a good-looking racehorse with real presence and talent. 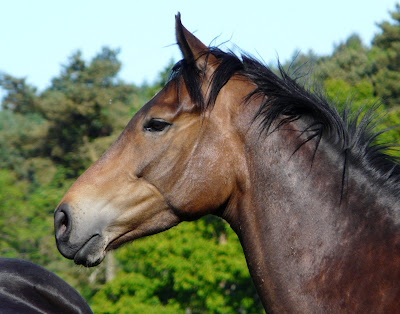