after escaping the frost last week it has been disappointing to lose the point-to-point at Alnwick today and I am afraid I have been a little self-indulgent by publishing various photographs below of our success on Thursday.
We hope to be racing again at Carlisle tomorrow when Papamoa is due to make his racecourse debut, he has been declared to run several times over the past couple of months, he seems well but as with the rest of them it is difficult to tell exactly where we are fitness-wise. 17 run and amongst them will be daughter Lucy partnering the Normile's point-to-point winner Barrhead which is also making its debut under rules. I am delighted that she is picking up one or two outside rides now on such nice horses as this and the Boswell's Floreanna, it is so good of them to give her a chance and I am sure she will justify the confidence they are showing in her. Later in the week we have a few entries at Ayr on Thursday but at this stage I think Almost Blue is the only likely runner.
We have had many gratefully received messages of congratulations from a huge variety of sources since Thursday and I am only slightly apologetic for putting the series of self-explanatory pictures below on the blog, I don't suppose I will often breed the winning horse (in partnership with brother Jamie and Stan) and the winning rider (in a slightly different sort of partnership with Mrs A), I won't bore you yet with some of the myriad of stories that have accrued about this particular animal but he was the horse that lost his bridle last March in a point-to-point and bolted prior to burying Lucy in a barbed-wire fence, with hindsight he was probably quite a "good thing" that day... 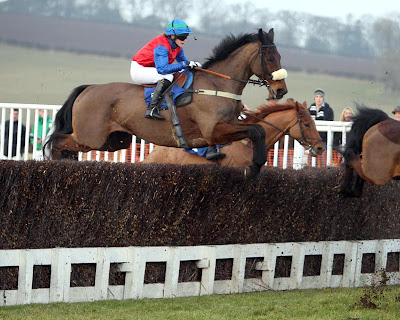 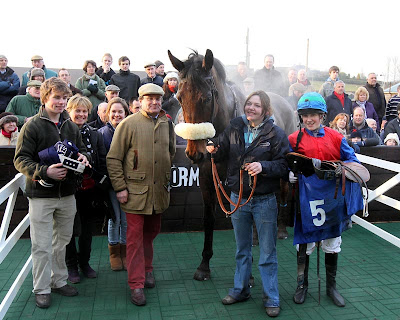 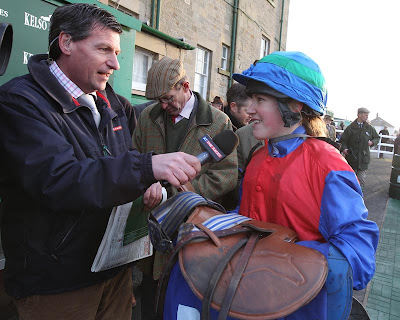 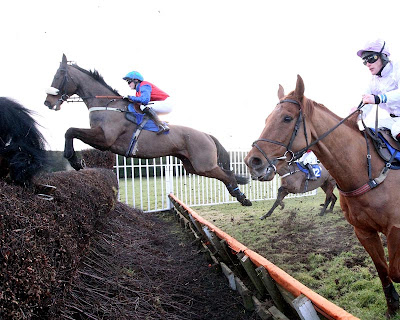 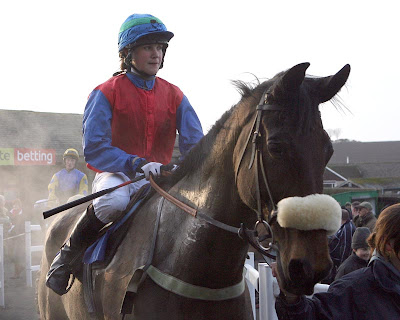 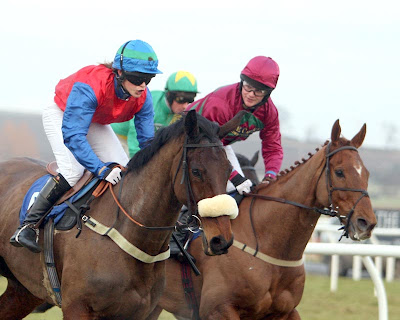 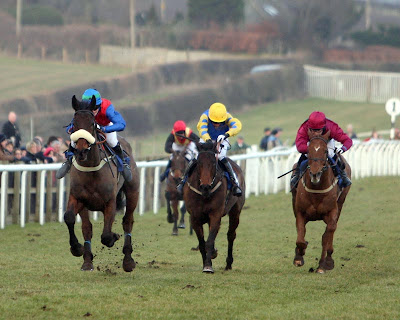 well, how about that, after what has frankly been a miserable winter Kelso yet again produced a moment of magic when Lucy drove the giant Seeking Power clear to win the 3m Handicap Chase. It was her first ride over fences (apart from one circuit in a Hunter Chase on Wise Man when she was 16) and only the horse's second run over fences, we were taking a chance by going into a competitive 16 runner handicap with such an inexperienced pairing and this was reflected in his odds of 40-1 but it was exactly the sort of contest I had planned to find for the horse, we had been looking since mid-December and I am just delighted that racing beat the frost and we were blessed with the required luck in running. It was wonderful for Lucy to record her first win against the professionals (all male!) in front of the usual appreciative and enthusiastic crowd that Kelso attracts.
It was down to earth with a bump in the next though when she parted company with Floreanna (for the Boswell stable in Northumberland) in an eventful Hunter Chase, then in the closing bumper Fearless Footsteps ran much better than on her debut but she needs to progress again if she is going to make the grade. Earlier in the afternoon Isla Pearl Fisher made his debut for the stable under Fearghal Davies, it was his first run over fences and he didn't jump nearly as well as he does at home which was a little disappointing but he got round to finish 4th and will be seen in much better light in handicap company, he enjoyed himself and learnt a lot which was the main point of the exercise.
The horses have generally been running well all week, Native Coll (Fearghal Davies) started the ball rolling with a 5th of 14 at Newcastle on Tuesday, an excellent effort in very testing conditions after 15 months off. Skipping Chapel (Fearghal Davies) came 4th on the same card, again tiring in the home straight on the heavy ground and then on Wednesday Forcefield (Lucy) made a most encouraging racecourse debut to finish a good fifth in the bumper at Musselburgh.
Beating the weather has been the story of the week and that looks like continuing over the weekend; we hope to run Almost Blue and Commercial Express at Alnwick on Sunday and then Papamoa at Carlisle on Monday but the forecast is very dodgy so we will have to wait and see...
Posted by Kinneston at 11:05 2 comments

It may appear that I have been rather quiet lately, this is because Mrs D (Mrs A's mother-in-law) told me to shut up until I had something a little more cheerful to say, well, Mrs D has dragged Mr D off to somewhere in darkest Africa and I will therefore take the opportunity to stick my head over the parapet.
It has continued to be a most frustrating period with two thirds of the racing in the North since early December being abandoned (statistics courtesy http://www.lucindarussell.com/), the weather has made it impossible to build any sort of continuity into the horses' training schedules let alone their racing. Every time we think we are about to get going again the weather closes in so I disclose our many plans for the coming week with a certain amount of trepidation...
WEATHER PERMITTING, Native Coll will run at Newcastle on Tuesday, a course & distance winner he has been off since injuring himself at Carlisle in November 2008, it's a long time off for a big horse like him but he is as fit as we can get him at home and he seems well. His younger brother Skipping Chapel is likely to join him; we might run Forcefield at Musselburgh on Wednesday and Isla Pearl Fisher, Seeking Power, Fearless Footsteps and possibly Almost Blue at Kelso on Thursday. Hopefully we will also be represented at the Alnwick point-to-point next Sunday and Carlisle on Monday 22nd, plenty to look forward to if the weather behaves.
I have been quietly updating the website with news of what runners we have had, suffice it to say they haven't exactly been starring but we were delighted last weekend when Lucy had her first 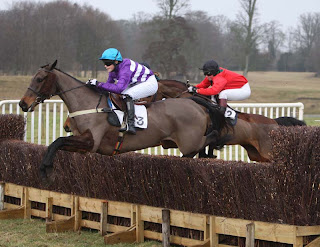 winner for an outside stable when picking up a spare ride on Floreanna in the Ladies Open at the Jedforest, it was a decent little race and she got back up in a blanket finish to win by two short heads; with luck she will retain the ride and the horse will reappear either under rules at Kelso on Thursday or at Alnwick on Sunday.
Mrs A has been playing her usual starring role; she was quite challenged this week though when a bay horse galloped back into the yard, fully tacked up but riderless, she caught the steaming beast but had no idea which horse it was or which stable it lived in. Oblivious to this drama, I was changing for a meeting; glancing out of the window I did wonder why brother Jamie was walking up the drive without his steed, the talented but fragile French bred Noir et Vert (ex Ferdy Murphy & a lovely propect for Hunter chasing), he seems to be Francois' favourite horse, funny that...
Posted by Kinneston at 10:23 2 comments