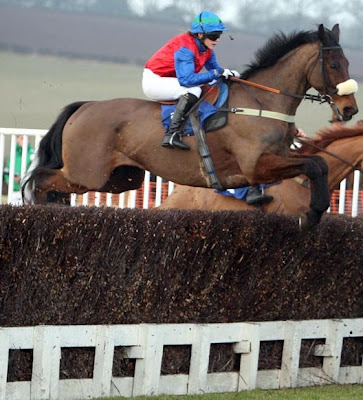 ...the 2009/10 jump season, well, it did on Saturday afternoon. There is no doubt it was a tough season, the weather took the heart out of the season really but I can remember setting myself some targets in public in mid-January when I rather optimistically thought the worst of the winter was over. I wanted 50 more runners before the end of the season with 20% in the first two and 50% in the first four - how did we do - hmm, I shall immediately make the excuse that the weather caused much further mayhem with abandonments stretching even into April but I don't think we did too badly in the circumstances, we sent out 47 runners 8 of which were in the first two (17%) and 17 in first four (36%) and I must add we had no fewer than eight 5ths. For the season as a whole, 2 winners and 8 seconds from 66 runners, it would have been nice if it had been the other way round! For the new season what targets should I set, not sure as we don't really know which horses we will have but to concentrate the mind I think I should set a pre-Xmas target as historically it always seems to have taken me until Xmas to get going and that is something I would like to change - how about 30 runners before Xmas with 20% first two and 50% first four - we'll see how we go.....
Sorry if that's all rather boring (what's new?), we did end up having a busy weekend starting in the rain at Perth on Friday evening where Forcefield put in a good effort to come 2nd in the Bumper with his debutant stable companion Northern Flame a most encouraging 4th. Over to Balcormo on Saturday where Almost Blue put his lacklustre effort on Thursday behind him to finish 2nd in the Members giving the winner 7lb, Whispering Moor gave Kit a great spin for two circuits in the same race but tired badly and was pulled up two out. Lucy was then a close 2nd in the Restricted on Amour Daria (for the Waltons), Kit 2nd in the Men's Open on Commercial Express (giving 7lb to a horse that was completing a six-timer - something wrong there), Lucy 4th on Foodbroker Founder in the Ladies Open and 3rd in the Maiden on Amulree who at last showed us some ability again. The rain softened ground encouraged plenty of runners and I think I can say it was the best racing seen at Fife for many years, however that's far too many 2nds but no winners; so, horses running well but not quite winning, excuses aplenty but frustrating all the same.
That was nothing compared with what was to come on Sunday though, Lucy went to Wetherby to take a ride in a hurdle on a 50-1 shot for a trainer who rang her up out of the blue; it belied its odds and was 15 lengths clear of the field when it tried to run out and slammed on the brakes at the second last dumping her in front of the hurdle, it's momentum was such that it then appeared to kick her over the hurdle prior to jumping it and landing on her, this all happened in a split second and made most disconcerting viewing from my armchair (roast beef indigestion ensued!) - elation that she was going to ride a winner, followed by horror as she falls then relief as the cameras look back up the home straight to see her on her feet, all this within about 15 seconds and all I can do is sit and stare at the television. She arrived home at about 9.30pm; tired, but fortunate to be in one piece though quite badly bruised.
This week we hope to have a runner or two at Kelso on Wednesday evening, Hexham on Saturday evening and at the Lauderdale p2p on Sunday; at the same time starting to turn some horses away for the summer with the first going to grass by the end of the week (sounds quite appealing to me...)
Posted by Kinneston at 15:33 3 comments 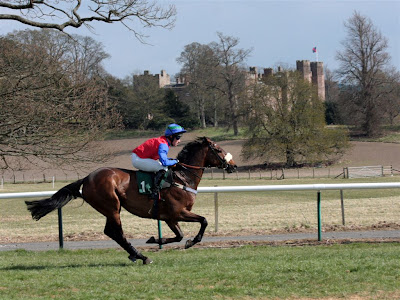 Almost Blue galloping in splendid isolation past Scone Palace at Perth yesterday (picture courtesy of Dennis Penny), sadly at the back of the field, it was another lacklustre effort, it may have been the tacky ground but I feel there is something niggling him this season, he will be thoroughly checked out this morning but if nothing comes to light he may well re-appear tomorrow in the Members race at the Balcormo point-t0-point.
Today at Perth we run two in the bumper at 5.20, 9 run and the ground is on the easy side of good; Northern Flame makes his racecourse debut, he is a smashing long term prospect and today will be all about showing him what goes on, he will learn and we will learn. He has loads of ability but has been slow to come to hand, Campbell Gillies rides. We also run Forcefield with Lucy on top, he has had a couple of bumpers not progressing as much as I would have liked between them, I think it was probably because we hadn't done enough with him due to the weather - no excuse this time!
Tomorrow we should be well represented at Balcormo for our local point-to-point; Whispering Moor runs for the Stanistreets in the Members (first race, 2pm) with Kit on top, he seems exceptionally well and might be joined by Uncle Jamie on Almost Blue. We then intend to run Foodbroker Founder in the Ladies Open, Noir et Vert in the Mens Open, Commercial Express in the Club race and Amulree in the young horse Maiden.... it should be a good day and there is a very competitive pony race lined up to start proceedings at 1.30pm, hopefully see some of you there. 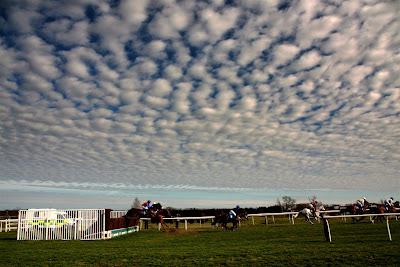 I do take my hat off to Willie Walsh, I think he may come out of this volcanic ash mess as a real hero, he didn't need to jump into a 747 and head off into the ash cloud to see whether the danger was real or exagerated by the H&S/EU driven mentality of the NATS but he did, I call that real leadership, I've always thought he had just about the worst job in the world but perhaps now his staff might rally behind him and even the public might start to want to "fly the flag" again, can't see the man from Ryanair following suit, this may prove to be a turning point once the dust settles (sic - sorry!). We were briefly caught up in the mess with our little holiday to Paris being extended by 24 hours and a rather inconvenient and expensive train journey home but it pales into insignificance by comparison with the misery being suffered by so many people all over the world, there may be 150,000 Brits stuck abroad but the total number of people finding themself displaced must run into millions - quite extraordinary the havoc that can be reaped by one volcano in Iceland, of course safety must always come first but I don't think anyone that has to deal with some of the completely absurd procedures imposed by goodness-knows-who in the name of Health & Safety would be surprised if it turns out to be a bit of an over-reaction, in a way let's hope so, things will get moving again and perhaps it could mark a turning point here as well...
Anyway, we have had a few runners recently, detailed in the news section of the web-site, not much to shout home about, they've mostly been running well enough but no winners sadly. This week we hope to run Almost Blue at Perth on Thursday and perhaps Seeking Power and Northern Flame on Friday. We will hopefully be well represented at our local p2p at Balcormo on Saturday and have entries at Wetherby on Sunday..... another winner soon would be nice! 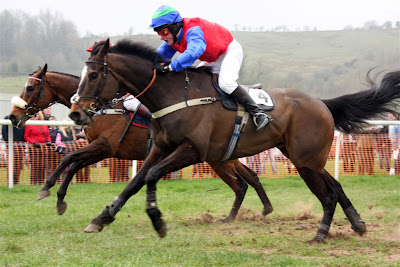 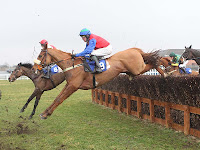 well, I don't want this to become another weather moan but the last week has been quite extraordinary - blizzards, gales, sunshine and rain - power cuts and some quite extensive damage, not ideal for training horses, hmm, anyway, it's going to rain again tomorrow and then turn quiet and settled for a while.

Today's Morpeth p2p has become the latest weather casualty but we did manage to take two to Carlisle on Saturday, Native Coll ran his usual game race to finish a close 4th in the 2m handicap chase but Seeking Power ran no race at all off top weight in the 3m novice handicap, his shins were a bit sore last night and I suspect he was feeling them from early on in the race, I think he needs longer between runs - there is a good race for him at Kelso on 4th May so we will keep him ticking over for that and hope conditions suit. He has made good progress this season and should be able to pay his way next winter in staying races in the North. 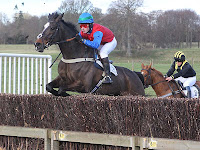 This week all eyes are on Aintree where we will not be represented with any horses though no doubt our 2nd guest tipster "Trendy-Wendy" will be making her presence felt with her barrage of emails to the BBC team - let's hope she proves more profitable to follow than the not terribly helpful "Fabby Frank". Hopefully we will have a busy day next Sunday when we are intending to be well represented at Kelso and the p2p at Netherby; we have Almost Blue, Noir et Vert, Amulree, Commercial Express (pictured right), Papamoa, Whispering Moor and Noir et Vert entered.
Meanwhile Skipping Chapel (top - at Ayr) is very fresh and well after short course of treatment following his burst blood vessel, we will look for a race for him soon. Four Fiddlers has taken a little time to get over his Ayr race (pictured on the way to the start for his racecourse debut) and may or may not run again this season, either way he is a lovely long term prospect. 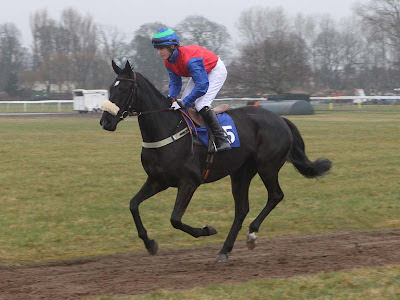