A hump with a view (apologies to EM Forster)

We know that the National Hunt season must be resuming in earnest when we head back to Kelso, and they have an excellent 8 race card on Sunday to kick off the season.  We run Sydney Cove for Lisa Ogilvie in the 5pm; he is making his debut for the stable, Lucy rides, 14 run and the ground should be good.  He is a well-bred but head strong sort of horse and the object on Sunday (as it has been for the last month) will be to try to teach him to relax and enjoy his racing, he has a nice handiap mark and if we can sort this out then he should be effective.  Lucy has a three other rides on Sunday; King's Chorister in the 2.05, Stanley Bridge in the 4.25 and Waterski in the 5.30 she will be doing her best to get her first winner as a pro on the board, this afternoon she rides Bunacurry in the 5.25 at Hexham.
Another glorious morning today, I even had to remove some of the horses' rugs when I was feeding them at 6.15 as they were sweating - completely unprecedented for the time of year & something's up with the cattle as well!  Some images from this morning at Kinneston.... 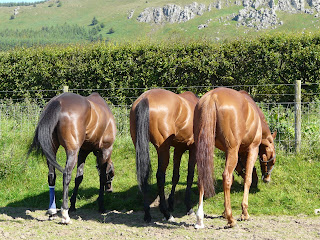 .. what have we done to deserve this, glorious sunshine and temperatures in low 20s, straw being baled, horses basking in the fields, trainer in his deckchair (ha ha).  First decent summers day since, well, longer than I can remember, I'm confused and nature is confused, several horses have their winter coats and were dripping this morning, first two due to be clipped this afternoon.  A few house martins and swallows still hanging about, normally well gone by now, and only one small skein of migratory geese seen so far - apparently there are lots around Montrose but normally we see thousands by now, too hot, they knew.  Constructive morning, some working on the all-weather others enjoy slow steady canters for a couple of miles round fresh stubble fields, all calm, until........ Joey (Mrs A's number one beloved) ate the plumbers' lunch (already had the farrier's and the vet's in recent history) - panic - all bread in house mouldy, time to hide in office and blog......
Posted by Kinneston at 13:55 0 comments

A bit damp here but harvest finished last night and indian summer on the way, today Lucy rides Daytime Dreamer in the 3.50 at Sedgefield for Martin Todhunter, he has been in good form on the flat but has a few questions to answer back over hurdles in what looks like a competitive race.  We have Isla Patriot entered at Hexham on Friday and then Northern Flame and Sydney Cove in at Kelso on Sunday.  Busy here with Ocarina, Capital Venture and Four Fiddlers heading to Lucinda's woodchip and the rest working on our own all-weather.

Yes, the sun made a rare appearance today, a glorious autumn morning and after a bit more rain tomorrow night we are going to enjoy some much needed better weather for a few days, harvest can be finished, straw baled and the grass gallops rested.  Plenty of action here this morning with next week's potential runners doing some faster work and the youngsters stepping up a bit, a few snaps below...
It's probably of very little interest to anyone but if you use twitter then do follow @kinneston - throughout the winter ﻿I intend to update regarding runners, going changes, Lucy's progress and also probably quite a lot of completely irrelevant drivel (not more they sigh!) as and when I remember!

I tend to feel a little wistful leaving Perth on the final day of the season, autumn is in the air and feelings are mixed between the excitement and promise of galloping winter horses on the track after racing and the sadness of the passing of another summer and season of fun.  We had a good year - 2 winners from 14 runners and another 6 placed - and some very special highlights, Kit winning on his first ride under rules, Lucy notching two excellent wins on Scotch Warrior (one in a hailstorm) and The Paddy Premium winning his first chase at the age of 11.  Some really promising runs from young horses such as Four Fiddlers, Papamoa (close 4th yesterday) and Little Glenshee.
Yesterday was another special day with great company and excellent racing, the real highlight though was seeing the Chairman's wife Fo Whittaker back on the course after being terribly ill during the summer, what a relief.  However much gloom is talked about the parlous state of racing I defy anyone to be pessimistic about the sport after spending a few days racing at Perth; at the end of the day it is about fun and if a sport can provide so much fun to so many thousands of racegoers then ultimately it has a great future, the laws of supply and demand will ensure that.
Anyway, late back last night after working Forcefield and Ocarina but delighted with Papamoa, beaten less than 4 lengths in his first handicap on only his 3rd start over hurdles and so pleased to be having runners again that I am already plugging in my entries for Hexham and Kelso later next week......  bring it on!

A tough start as a professional yesterday for Lucy with two outsiders; Floreana was out of her depth and never able to compete, Mirage Dore ran a more promising sort of race but tired in the latter stages to finish a remote 5th at 33-1.  The Paddy Premium was tiring in 4th when unseating Wilson Renwick at the 2nd last, I think the testing ground just asked a bit too much of him on his first run back after a break.  Today we run Papamoa in the 4.05 with Lucy on board, he is a promising young horse but lacks experience and whilst he will come on for the run he could put up a bold show if it rides soft.

The waiting's over and tomorrow we send out our first runner since 5th June when The Paddy Premium lines up for Mark Fleming in the 3.35 at Perth, 6 run, Wilson Renwick rides and the ground will be on the soft side.  He seems fit and well and schooled nicely this morning - fingers crossed.  A momentous day for Lucy as well when she takes her first rides as a professional, on Floreana for the Boswells in the 4.45 and Mirage Dore for Rose Dobbin in the 5.20.  She becomes only the 3rd female professional jumps jockey in the UK and I believe the first ever from Scotland so let's hope it works out.... on Thursday we hope to run Papamoa in the 4.05 with Lucy on board.
Posted by Kinneston at 16:46 0 comments

A wet night and wild this morning as the tail-end of Hurricane Katia blows in. Not a day for messing about; 3 lots, 25 mins warm-up in the school, twice up the all-weather, 20 mins warm down and back in. It feels as if we have already had more than our share of autumn storms and its only 12th Sept! One or two pics taken on Friday by an old friend who is setting up a new racing club which I am hoping will have its horses trained here, more details to follow!

Annual rainfall records are being broken and we sit here with a couple of hundred acres of valuable grain to combine with no sign of the weather giving us the chance;  all over Scotland there are huge tracts of land heavy with cereals, the absence of sun has made them slow to ripen and people are starting to become a little bit edgy.  Too much time is being spent looking at the weather forecast, tomorrow is to be stormy and wet and whilst we should get a couple of decent days mid-week it is due to turn wet again next weekend, ten days of good weather would sort it for most people, let's hope, in the mean time we wait for the contractors.....
Horses in good order though and the upside is there should be some nice ground about when we start racing, our most forward horses are probably 3 weeks off a run but we will no doubt be tempted to make a few entries at Perth in 10 days time.  Chapel at Johnny's school today, they've only been back a week but there are an alarming number of boys on crutches and with arms in slings..... good old rugby!
Posted by Kinneston at 18:28 0 comments

Glorious warm breezy afternoon here today, perfect combining weather and a stark contrast from the rain and gales earlier in the week.  Our first expedition to Lucinda's AW on Tuesday with The Paddy Premium, Papamoa and Forcefield, plenty of work here as well -  in the schools, on the riverbank, round the stubbles and up the all-weather, Louisa (fresh? from Burleigh) in this afternoon to do flatwork with The Paddy Premium, Forcefield and Northern Flame.  Lots of visitors which is fun, horses appear well, another week and we will be thinking about entries...... yo ho.
A triumph at Sedgefield on Tuesday when Lucy won what may well be her last race as an amateur on Pete for Barry Murtagh. A tricky ride in a competitive looking event, he races keenly and has to be produced in the shadow of the post as he will stop in front, she pulled it off but plenty of drama at the last hurdle, pictures courtesy of John Grossick.
﻿﻿﻿﻿
﻿﻿﻿﻿

Big day yesterday for Family Alexander as the youngest headed off to boarding school for the first time, it brought to an end what has been a very happy summer despite the weather and Mr & Mrs A were a bit choked up as they headed down the drive, big deep breath and all seemed to go smoothly once we arrived.  Busy again today and the gallops and horses were in fine fettle on an atmospheric autumn morning, pictures of some of the horses that were out on the riverbank below.  Tomorrow at Sedgefield Lucy rides Floreana for the Boswells in the 4.50 in what looks like an ordinary contest and then Pete in the 5.20 for Barry Murtagh.

Soft weather, as they would say in Ireland, here this morning - ie steady warm horizontal drizzle - but an excellent one with the horses, all cantering 10f in the deep sand round school then once all the way up the all-weather and two faster halves - all seem in very good fettle, just need to do my best not to mess things up over the next month.  Quiet day on the walker and in the padocks tomorrow and then another step forward next week, beginning to think we might even have one or two ready for Perth........